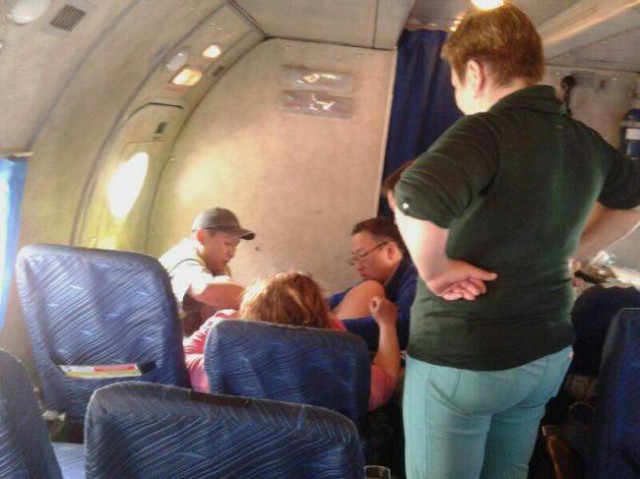 A Russian plane ended up with two extra passengers after it landed after a pregnant woman gave birth on board to twins. Irina Vasylkova, 25, was on the 35th week of her pregnancy when she boarded the Polar Airlines flight from Zyryanka, an urban locality and the administrative center of Verkhnekolymsky District in the East Russian Sakha Republic to Yakutsk, the capital city of the Sakha Republic. But surely into the journey she went into labour unexpectedly, and after giving back one of the seats with more legroom, stewardess Christina Kondratiev tried to get the young woman to relax in the hope that the delivery would wait until the plane could land. She said: „I told the pilot and he sped up the flight to make sure that we could arrive as early as possible, but it was clear that the delivery was not going to wait.” She said that she had made an appeal to see if there was a doctor on board the type AN-26 aircraft, and was rewarded with a positive reply when obstetrician Elena Sleptcova stepped up and offered to help. The first baby was born in here, and the second was born just as the plane landed, giving the new mum twin girls she was wheeled out into the appropriately named arrivals lounge. Paramedic Alexander Popov who rushed onto the plane as soon as it had landed said that by the time she got that everything was over ñ and she was pleased to see that both mum and baby girls were doing fine. Mother and daughter were taken to a local hospital where all three are doing fine, and the new arrivals have already met their older sister, Angelina, aged four. And as a special bonus, Polar Airlines have already said that they are preparing gifts for the mother and her twin babies, of which the main one is free travel for life on any polar airlines plane. (ends)